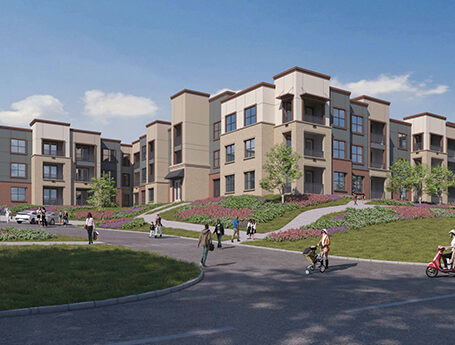 After seeing its population grow by 97,000 between July 2020 and 2021, the Dallas-Fort Worth (DFW) metroplex is now home to nearly 8 million people, according to data from the U.S. Census Bureau. And it’s getting increasingly harder to adequately and affordably house the growing population.

The problem isn’t new, just exacerbated, and it’s hardly unique to DFW. But when a market experiences the rate of population growth that the metroplex has over the last decade, the question of how much housing inventory exists that’s financially feasible for the average resident to rent or own gets thrust under the microscope.

Of course, there’s a major difference between housing that’s affordable and affordable housing. The former is something of an arbitrary concept, whereas the latter carries a precise legal and regulatory definition. But the socioeconomic issue embodied within the two is largely the same.

A recent report from the National Low Income Housing Coalition ranked Texas — once heralded as the land of infinite land — as the sixth-worst state in terms of availability of rental housing for low-income households. This finding runs counter to Texas’ longstanding reputation as a state with an affordable cost of living, but also illustrates the inevitable economic impacts of 10 years of rampant job and population growth.

So what are developers and local leaders to do? Push for reforms to zoning laws? Lobby for federal and state legislation that increases allocations of tax credits and other incentives? Consider cheaper, alternate forms of construction like modular housing? According to some industry professionals, each of these solutions should be taken seriously, because it may require the execution of all of them to slow the widening of the supply-demand gap.

“Housing affordability is a crisis today and will continue to be a crisis tomorrow if we don’t get serious about finding creative solutions,” says Antonio Marquez, principal and managing partner at Comunidad Partners, an Austin-based owner-operator with an active presence throughout the metroplex. “It’s not just a social issue; it’s an economic issue, and it affects everyone, either directly or indirectly.”

In substantiating that claim, Marquez pointed out that many people who work “essential jobs” — a term that dominated the national rhetoric during much of the pandemic — rely on affordable and workforce housing.

“COVID taught us just how important the essential worker is to the fabric of the community and its economic productivity,” he says. “If we can’t keep our essential workers in their homes, we’re not going to have that productivity, nor will we have that social and civic engagement. So it’s in our best interest not to displace our internal workforces in these communities that need housing stability and supportive growth.”

Easier said than done. Generally speaking, rental rates are skyrocketing across major U.S. markets, and DFW is no exception. According to data from CBRE, multifamily rents spiked by 17.9 percent between the first quarters of 2021 and 2022, currently clocking in at an average of $1,428 per month for a one-bedroom unit. And even with tens of thousands of units under construction throughout the metroplex, occupancy stood at 97.4 percent at the end of the first quarter, per CBRE.

In addition, single-family home prices have escalated so drastically of late that the space has become a target of institutional investors, as well as a potential bubble market in the minds of some economists. The average interest rate on a 30-year fixed-rate mortgage stood at 5.3 percent at the time of this writing, down from its 2022 high but also well above the averages of the last several years. And according to Zillow, single-family home prices  have risen nationally by 20.9 percent over the past year.

With the usual suspects of land and construction again serving as the primary cost drivers behind the affordable housing supply shortage, owner-operators like Comunidad Partners have turned their focus to rehabilitation and preservation.

Most recently, the company acquired Villas del Zocalo, a 437-unit affordable housing community in Dallas. Comunidad Partners plans to implement a series of interior and exterior renovations to the community, as well as add value through the implementation of social impact programming. These resident services typically include programs for financial literacy, jobs training and virtual healthcare.

“We’re not high-leverage buyers, which puts us in a good position to buy and preserve assets, because a lot of those owners can’t refinance in this interest rate environment and are therefore having problems with their portfolios,” notes Marquez. “But while preservation is very important, we’re actually losing units from that perspective, and that can’t be the only solution.”

“Because rents have increased so much, there’s pressure on existing affordable housing communities that have reached the end of their mandatory compliance periods,” he explains. “Many owners see this as an opportunity to convert those affordable units to market-rate housing and significantly increase rents.”

With higher rents come higher valuations and stronger motivations for sellers to sell, which in turn brings more investors to the table to compete and bid up prices. In theory, all of these market forces serve to persuade owner-operators looking to maximize profits and returns to investors to consider converting affordable assets to
market-rate housing.

“Rent increases in major Texas markets over the last couple years have brought more buyers into the state, and there’s more money chasing deals than we’ve seen in the last 20 years or so,” notes Kevin Bowen, executive vice president in the Dallas office of Bellwether Enterprise.

“Historically, for a deal to trade at a sub-5 or a high-4 cap rate was pretty aggressive for the Texas markets,” he continues. “But that’s been considered conservative over the last couple years with all that outside money coming in and bidding prices down into the 4s and sometimes into the 3s. It’s just the new norm in major markets.”

The fact that short-term interest rates are now rapidly rising in response to a 40-year high in inflation — the Consumer Price Index rose by 8.3 percent in April — is amplifying barriers to new development. Essentially, sources say that higher interest rates cut into the contributions of subsidies to the capital stack, thus forcing developers to secure more conventional forms of construction debt and equity at a time when the cost of capital is rising.

Land and construction costs notwithstanding, ground-up developers in DFW often face another unique challenge to growing supply that has nothing to do with raw economic inputs or financing terms, notes Avis Chaisson, director of real estate development at Dallas-based Palladium USA. That obstacle centers on pushback from local residents and elected officials in certain municipalities that simply don’t want more affordable housing — or any multifamily development — in their communities.

The reasons for reluctance vary from one municipality to the next. But Chaisson believes that many of the excuses and roadblocks that communities throw out share the common denominator of misperception about what these projects entail and what kinds of people they’ll house.

“Community outreach and getting to know neighbors and hearing their feedback is a huge part of what we do as developers,” Chaisson says. “In some cities, there’s just not an accurate understanding of who workforce and affordable housing renters are. We show the faces of our residents, invite them to come out and speak and really try to humanize our projects. But sometimes communities still don’t want us.”

Palladium tries to overcome that obstacle by doing as many mixed-income projects as possible. But reliance on mixed-income product can create delays in terms of securing bond financing. Chaisson says that in order to get priority placement on the bond reservation list, a project typically has to be 100 percent workforce housing.

If opposition to new affordable housing projects isn’t rooted in concerns over negative and stereotypical renter profiles, then it often comes in the form of basic aversion to new multifamily development of any type.

“Some communities don’t want the density that comes with multifamily,” Chaisson says. “They think it infringes on privacy, brings crime, decreases property values, adversely impacts school districts or reduces the
number of sites meant for retail. So while
everyone recognizes the problem that is the shortage of affordable housing, getting projects to the finish line and getting neighborhoods on board represents another barrier to adding the product we need.”

Finally, affordable and workforce housing developers in DFW are embroiled in relentless competition for sites with market-rate developers.

The metroplex has recently established itself as a top-tier market for multifamily development, averaging annual supply gains in excess of 20,000 units over the last few years. Despite this inventory growth, soaring demand has continued to draw many-a-market-rate developer to that market. These firms have built-in advantages over their affordable and workforce counterparts when it comes to land
acquisition.

“Market-rate buyers can close within 90 to 120 days, and we just can’t close that fast, as getting support for the deal both financially and politically takes time,” says Chaisson. “We try to do mixed-income as much as possible, though that doesn’t help with feasibility periods because approvals and bond reservations are layered. Timing doesn’t change just because you have a market-rate component.”

As a testament to the equally staggering level of demand on the affordable side of the market, Chaisson points to one of her company’s recent projects, Palladium RedBird, a 300-unit community in Dallas. The project took less than three months to reach full occupancy and currently has a waitlist of more than 600 applicants.

Because affordable and workforce housing projects require longer time frames and more complex procedures for securing approvals, permits and financing, lenders who underwrite these projects are forced to project revenues and costs along even more protracted and drawn-out timelines. This is compounded by an array of pressure points within the global supply chain that are creating even more volatility and uncertainty in terms of costs of construction labor and materials.

“There isn’t really a one-size-fits-all solution to the issues of rising land and construction costs,” says Bowen of Bellwether Enterprise. “Being in an inflationary environment further complicates the problem. Prices of all materials have gone through the roof, and we’re absolutely factoring that into our underwriting on new projects. We’re also seeing replacement reserve requirements go up a little bit.”

“With where interest rates have recently gone, a lot of deals have become constrained in terms of debt service coverage,” he continues. “Where we used to get 75 or 80 percent loan-to-value (LTV) and a 1.25X debt coverage, now we’re at 55 to 60 percent LTV on 1.25 debt coverage due to higher interest rates. This is creating larger gaps for investors to cover.”

Bowen also says that lenders are looking especially hard at two key expense items in their underwriting: insurance and taxes. Property tax increases are a natural byproduct of growing communities and economies, but the patterns that insurance costs are exhibiting reflect market circumstances that are somewhat unique to Texas.

“Part of the reason that insurance costs have gone up is because Texas has a lot of wind and hail, which damage roofs,” Bowen explains. “Coverage for that type of weather has gone up because the cost of replacing or repairing roofs have gone through the roof due to materials shortages. Replacement costs are always a big factor in calculating insurance risk.”

Weissman of Lument notes that moves toward lower volumes of construction loan issuance or less-favorable terms on these deals is generally seen more in the market-rate segment than on the affordable/workforce housing side.

“We’re seeing lower loan-to-cost loans and higher pricing on those loans due to a perception of increased risk,” he says. “While that isn’t so much the case on affordable housing transactions due to fact that Low-Income Housing Tax Credit (LIHTC) rents are considerably below market rents, but more subsidies are needed to cover the higher costs to build. There’s very little in the way of federal subsidy for projects other than LIHTCs.”